A local gem revived – One of my favourite walkabouts on a lazy Sunday is through Norfolk street, the cemetery onto the hustle and bustle of Mill Road. It’s not just an interesting walk, but a perfect route to pick up some local and international delicacies. I like to start at Norfolk Street Deli for some lovely Italian pastries ( especially the one with white chocolate is delicious) and for biltong, Mrs H.S Ball’s Peach chutney and Koeksisters. The only place in Cambridge, where you can get this South African fix. Much needed for an ex-Capetonian. 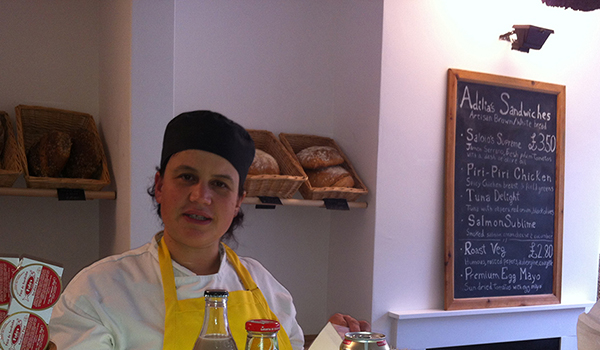 The silence at the cemetery is a huge contrast to the hustle and bustle of Mill Road. You wouldn’t think so, but they are both fascinating Foodie Haunts. At certain times of the year you could dish up a lovely meal with the foraging at this Victorian cemetery and Mill Road is lined with many spice shops and international delicatessen shops. Of course the urban farm shop Urban larder and the excellent fishmongers Sea Tree shouldn’t be missed out on this.

It is a pity, that some shops in Norfolk Street had to close down over the years. However it is great to see, that young entrepreneurs notice the gap in the market and open up shop. One of them is Adilia Frazao. She moved down to Cambridge from London and I am glad she decided to do so as the Old Norfolk Street Bakery has turned into a wonderful bakery, where they sell delicious British and Portuguese bread and pastries.

I popped into Adilia’s the other day. The Bakery, who was established in 1868 and had to close down many years ago, not only sells fantastic produce, but it is a refreshing concept and a huge addition to the Petersfield neighbourhood. Saying that it probably is not only a huge drawcard for the local residents, but for Cambridge residents too.

I was amazed at the scene here. Customers were popping in and out and the full plate of custard tarts was sold out within 5 minutes time. A local businessman popped in on his way home for a loaf of artisan bread – ” Wow, I hadn’t realised the bakery is open again and what a delight to have the Norfolk Street Bakery back. ”

Such a delightful bakery should be shared with much more people so Adilia’s Norfolk Street Bakery is now part of our Cambridge Food Tour. Just in case you might think, Adilia is only selling artisan bread and delicious pastries, they serve nice coffees, local and Portuguese drinks, handmade sandwiches and pizzas too.

Adilia’s Norfolk Street Bakery is definitely a reason to head off to this part of town.

We use cookies to ensure that we give you the best experience on our website. Find out more.