24 Oct Bake off at the Alexandra Arms

Cider & Sausage Festival at the Alexandra Arms ( now the Alex as it changed owners, October 2017 comment)

Last weekend on the 18th of October, the Alexandra Arms celebrated this year’s fantastic apple crop with a Cider and Sausage Festival and invited Cambridge residents to join in on their own Alexandra Arms bake-off. All creations had to be homemade and contain apple. I was invited to judge the entries, which wasn’t easy as the apple pies looked and were all delicious.

The Alexandra Arms dates from c.1870 and was one of the earlier buildings on Gwydir Street. Four years later, there were about 120 houses in Gwydir Street. Only one-third of the houses were numbered though. There was certainly not a shortage of pubs as there were five at the time – the Brewer’s Arms, the Dewdrop, the Gwydir Arms, the Alexandra Arms, and the Prince of Wales on the corner of Norfolk Street”. Now many years later there are only two left; the Alexandra Arms and the Dewdrop (now the Cambridge Blue).

On The 30th of November 2012, Craig and Jenna Bickley, who also run the Free Press in Prospect Row, reopened the Alexandra Arms. The pub is named after Alexandra of Denmark, wife of Edward VII. She would have been Princess of Wales at the time the pub was built. The new pub sign of the Alexandra Arms shows an image of Alexandra on a stamp issued in Newfoundland in 1911.

Although the Alexandra Arms seems to be tucked away from the hustle and bustle of the centre of town, it is easily accessible from Norfolk street or from Mill Road. Norfolk Street is just off East Road close to the Grafton Centre. 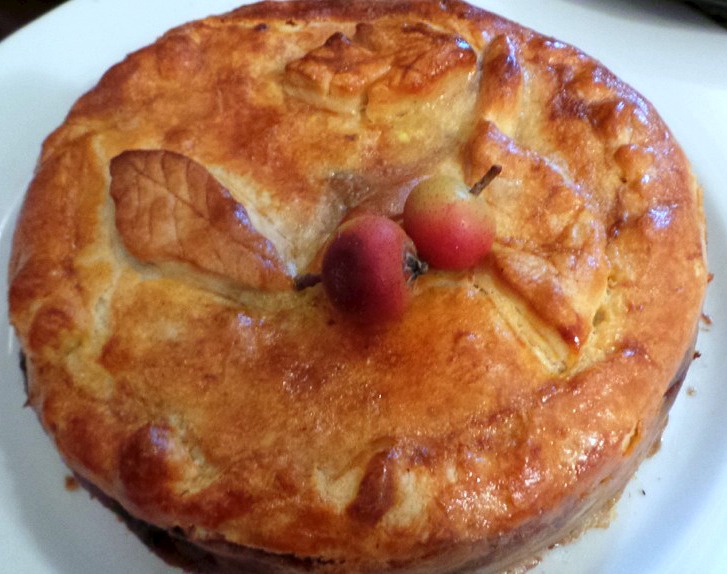 And the winners were…. 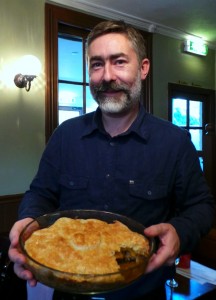 Kirsten Horn – A savoury apple pie with pumpkin and beef 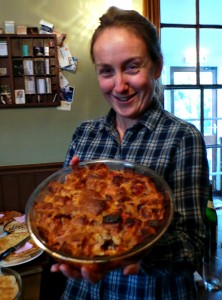 Both Kirsten and Kathinka are well known in the Cambridge Food scene. Kirsten is co-owner of River Farm Smokery in Bottisham and Kathinka runs the food hall at Burwash Manor. She sells these delicious Red Devil apples here.

I’m glad that so many apple festivals are popping up so we can celebrate the wonderful selection and taste of British apples. Unfortunately, they are a hard find these days. Many traditional old varieties have been replaced by more popular easy to grow apples or ones with a more attractive look and ones which are available all year round. Two of my ‘old fashioned’ favourites are the Cox and the Russet.

The Cox, which is an aromatic and crisp apple ‘has been replaced by’ the Gala. This apple was first grown in New Zealand and is less sweet, which suits the modern palate and is available all year round.

The Russet is a quintessential English apple and was already around in the Victorian times. It appeared in novels of Shakespeare in which he described them as ‘a dish of leather coats’. The skin can be as wrinkly as leather, which makes it not a very nice looking apple, but oh so tasty. The russet is very popular for making cider and the apple juice.

So why I mention these tasty apples? The quality of a product is always what goes in it. The wonderful Red Devil made Kathinka’s apple pie stand out from the rest.

Keen to taste the Red Devil? You’d better head off to Burwash manor soon before they’re sold out.