Posted at 12:47h in In the News by Gerla de Boer 0 Comments
Share

Gerla’s city Tour will offer food for thought – The latest “experience” on offer in the city comes from Cambridge Food Tour, a business set up last month by foodie, Gerla de Boer.

Gerla, who comes from Holland, has lived in Cambridge many years. Her background is in food – during the ’90s she created ready meals for a leading company in the sector – and she has travelled widely, always with a keen eye to local cuisine. Her idea was to create a walking tour of Cambridge taking in some of the less trodden paths and at the same time visiting foodie haunts. She also talks about food history, mixed in with stories about Cambridge. 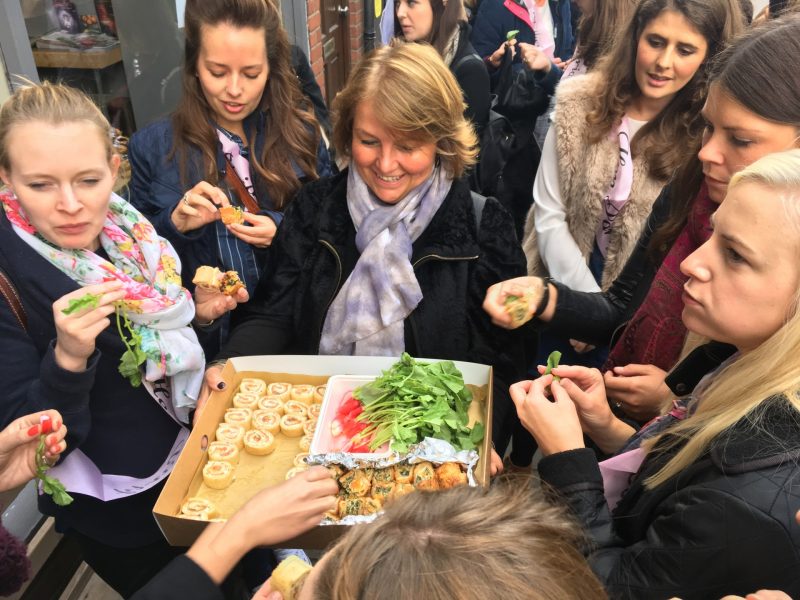 “Some of the food thought of as typically British, isn’t,” she says. “

“Take pies, they come from Egypt and were picked up by the Romans who brought them here. And fish and chips – chips come from Belgium and the fish was added by the Jews.

“The only thing that is British is the sandwich.”

Gerla has done her research, making sure all the foodie haunts in town are on board for her venture.

The tour takes between three and half and five hours, overs up to seven miles and a large number of venues. It costs £50 and includes all food and drink and a couple of small gifts, cakes and fudge.

“As well as going to places like Fitzbillies, I also take the tours along Mill Road, which is somewhere tourists don’t often go.

“I also take them to the cemetery, which is another place not often visited.”

Gerla says she is getting a lot of interest from local people as well as from tourists.

She says she can tailor tours to individual tastes and is currently planning an ethnic foods tour of the city.

“I have come across food tours in Rome and in Delhi, and there are a lot in London, so I thought I could do this in Cambridge.”