9 Course tasting menu – On the 24th of November we kicked off with our first Chef’s Table.  In case you haven’t been; what did you miss out on? 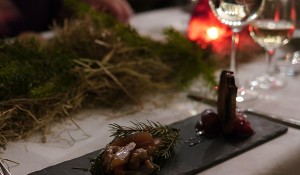 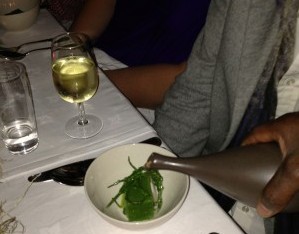 Venison in the Forrest with Cauliflower Floret 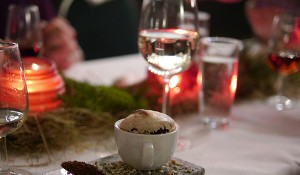 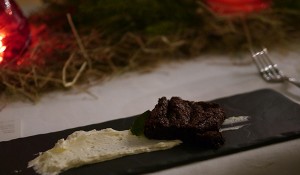 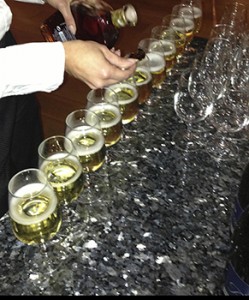 Pinot Noir – the most difficult of grapes to succeed with. Made famous by the film “Sideways” at the expense of Merlot.The grape that makes all the famous red Burgundy wines, but which not necessarily mentioned on the label.The Bortoli family (Italian originally) made in Victoria, Australia.

Otherwise known as Pinot Grigio. The wine is from the village of Hunawihr, near Colmar in eastern France. Although it looks German, but is in fact French, bottled in traditional Alsace “flute”. Not quite dry and therefore perfect with richer flavours.

Grape: Gruener Veltliner – not very fashionable unless you are in a New York restaurant. Signature grape of Austria, but is grown elsewhere in smaller quantities. Perfect aperitif, but very food friendly too.

Grape: Fiano from southern Italy (Sicily in this case) and only just being discovered in export markets. Lovely quince-like flavours.  No oak. MandraRossa is a dynamic company putting Sicilian wines on the map.

Dr Loosen (Ernie to his friends) is a Mosel maverick who collects Jaguars (the cars). He has a joint venture in Oregon producing Pinot Noir, but his speciality is Riesling from very steep slopes bordering the Mosel(le) River. Some of his vineyards are on a special red slate soil giving a special character to the wine. Riesling is great with pork!

This is red wine and made with Pinot Noir.The Cote Chalonnaise is a slightly underrated part of Burgundy normally producing solid styles.

Treloar is owned by an Englishman and a New Zealander. Muscat is one of the few grapes grown as much for the table as for wine. Made by the ancients, it grows around the Mediterranean in many forms. This one is lightly fortified to 15%  i.e. added alcohol, but still delicately fresh.

Sherry/Xeres must be one of the most underrated of alcoholic drinks. From the town of Sherry (Jerez) and again, fortified to 17.5% Oloroso’s can be dry – this one’s a little sweet with some addition of Pedro Ximenez grapes to the original dry Palomino. Barbadillo has been making excellent wine since 1841 and is based in Sanlucar next to Jerez.

Port – surely one of the best drinks in the world? Again, fortified to 20% – one of the few fortified reds. Red berries, rich fruity/chocolate flavour, delicious grip and great with chocolate! Smith Woodhouse wonderfully underrated.  Samuel Pepys drank a bottle a day.

One of our favourite private chefs and the ultimate chocolate lover. Have you ever thought of sampling potatoes with chocolate, vegetables in salt dough or dehydrated carrots? Damian Wawrzyniak our private chef loves using chocolate in his creations. It’s always a great joy to dine or lunch with Damian as you watch him creating his wonderful food in the interactive kitchen. The uniqueness of his striking creations is, that he uses old, traditional methods of cooking which date back centuries.

Damian loves dipping into old cookery books for inspiration, but his high standard and inspirational way of cooking comes from being trained in world-renowned restaurants too, amongst them the famed Noma in Copenhagen. He is not only an inspirational chef but a Chef consultant and great team builder too. A chef of many skills. Not many words needed here.

For the Chef’s Table of the 24th of November, Damian asked Dennis to join him in the kitchen.

It’s with Dennis all about special effects, dry ice, gelifications and spherifications! He is a self-taught chef and has been in the industry for about 15 years and works currently for Lexington Catering at one of their flagship contracts, Knight Frank in the West End of London. Dennis started as a kitchen porter at Merrill Lynch in 1995. He quickly worked his way up the ranks through his passion and curiosity for food, which has led to exciting opportunities of working alongside some of the most highly acclaimed chefs in the trade across the world.

He was in a master class with Marco Pierre White during a pilot dry run of the last series of Hell’s Kitchen, worked in Burj al Arab in Dubai, Aquavit and WD-50 Restaurants in New York. Dennis is an active member of The Craft Guild of Chef and is a keen competitor with over 40 medals both National and Internationally. 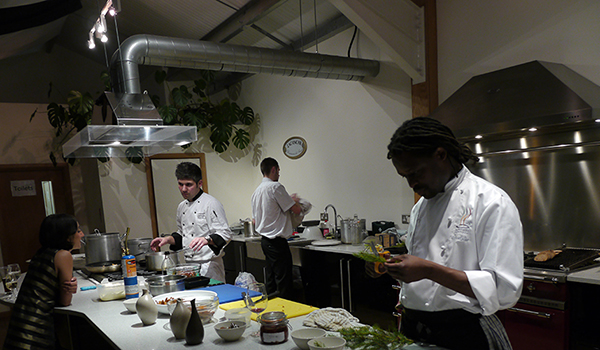