Sunshine in Midwinter – A Creole Soirée.  Autumn has finally arrived. We shouldn’t complain though as we’ve had a lovely and beautiful summer, which never seemed to end! It’s now time to look forward to evenings with roaring fires, comfort food and dare I say it…. Christmas.

Although I am all set for tucking into warming dishes with game, I was very pleased when I was invited for ‘a Creole soirée’ at lunchtime by Corinne of Gourmandises to sample her food for her pop up dinner soon to be held in Haslingfield to celebrate books, paintings and cooking inspired by Réunion. 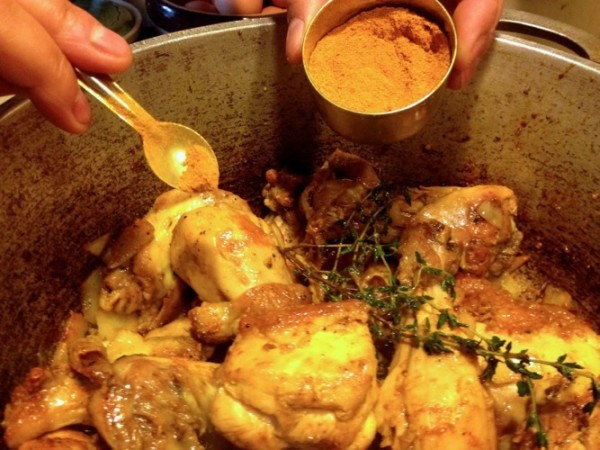 In Réunion, food is a real feast, any occasions quickly turn into a big party. Soon you’ll find yourselves surrounded by large numbers of people with tonnes of delicious food. Réunion lies in one of my favourite parts of the world. The culture and the food have been inspired by many cultures as it was part of the ancient Spice Route, not to be confused with the Spice Road, which runs from Rome to the Far East on land. The East Coast of Africa was one of the 3 Spice Routes. Along with this route, there were many important stops for traders to trade and to ‘pick up’ slaves. The Dutch, French and the Spanish were frequent visitors of the East Coast of Africa. 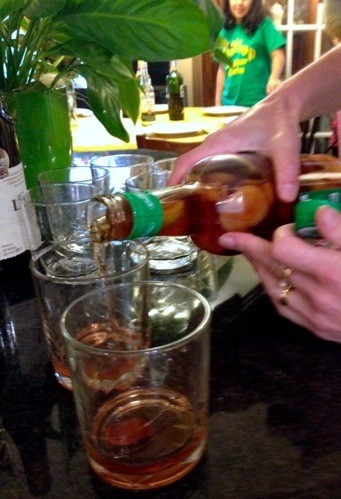 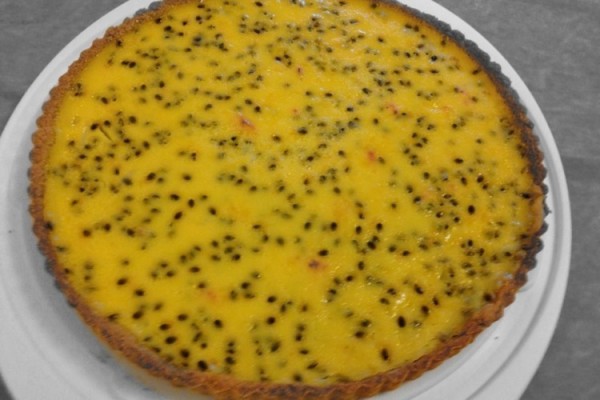 With so many foreign traders, the local cuisine changed and flavours from ‘the West’, and the East influencing its development. Every area in this part of the world has it’s own fusion style of cooking. In Mauritius the Indian’s were more predominant as you will notice in the delicious creations of  Master Chef winner Shelina Permallo and in Réunion, the French had a bigger influence. This resulted in two different types of cuisine as the French like to use Thyme and herbs and the Indian’s their local spices. It can be very confusing as the food carries often the same name, but by using different ingredients, the outcome is completely different.

So what did our ‘Creole soirée’ include? To kick off our meal we had a lovely ‘Rhum Arrange’, which is made of local rum and mango juice. The rum has a special touch as they like to infuse seasonal fruits in the rum. So last Sunday it was plums for the ‘soirrée’ in November Corinne has infused slow berries.

Next was the main course. The Creole cuisine is very similar to the Indian one. There is a set base. Rice, pulses and meat, fish or a vegetarian choice. We had Cari of chicken, rice and haricots beans simmered in thyme and turmeric. The last ingredient is a very important one in Creole cuisine. It was delicious. Although you can use vegetable oil, Corinne used the fat of the chicken which she cut up (sourced from Cowlings family butcher). It’s not only a good use of ingredients, but the fat enhances the flavour of the Cari too.

Corinne is an excellent good patissier so I was very much looking forward to the dessert. The passionfruit tart was light and the filling was amazing. I used to eat this a lot in Cape Town, but this one beat definitely all the ones I have had before. The filling was only 0.5 cm high. That is all you need. Nothing stodgy. Just lovely and light.

As one of the French guests said we ‘déguste’ our food. This means, that they eat their food slowly so they can enjoy it longer. That’s so true! And guess what, Corinne had another sweet delight in stock. My favourite – Gateau Coco, slightly chilled. It’s so tempting, that it is difficult not to keep dipping in. 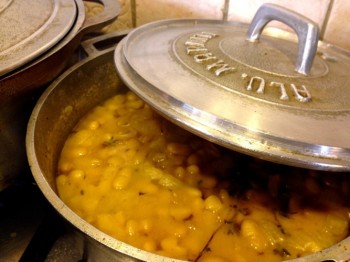 So what is the key to her success? Her love of food, her mother and her pans! Corinne uses traditional pans from Réunion, which can hold the heat to prepare this cuisine. They are made of aluminum and do get really hot!

For her pop up she will show off more of her skills as there will be more delightful dishes to sample. Keen to taste ‘the sunshine’? Book a place on her pop up on the 30th of November. There will be 4 courses for £ 30 or per couple £ 55. More details here…

And as Corinne says –  “A compromise is the art of dividing a cake in such a way that everyone believes that he has got the biggest piece.” Paul Gauguin

p.s. Keen to learn how to make delicious French pastry of Creole cuisine? She does cookery classes too.