Street Food Friday In CB1 Starts 6 June – It’s not only boom time with the food scene in Cambridge, but the local street food scene is taking the streets by storm. In the local food scene, we see new foodie shops, restaurants and bars are popping up all over town, Supper Clubs and Pop up Restaurants seem to grow just as fast as mushrooms and the Street food scene is finally hitting Cambridge. Of course, we have had our Kebab vans dotted around Cambridge for many years, but the nice Street food was a hard find. You only could resort to Crêpes, Falafel, sausages, baked potatoes and for a more exotic take away, Caribbean food ( close to the Travelodge). More recent additions to the scene were Belgium waffles on the market, Steak & Honour with his delicious hamburgers and Jack Gelato with his fantastic ice-cream roaming the streets of Cambridge, but there is more savour on the streets soon.

FoodPark will be hitting the street for the first time on Friday the 6th of June. Although we have had 2 street food markets over the last year during the Eat Cambridge Food Festival, FoodPark will have is maiden journey next week Friday.

The mastermind behind this new venture is Heidi Sladen, also known as one of the organisers of The Eat Cambridge Food Festival. Heidi does like to pack it in though with Eat Cambridge barely behind her. Amongst all the organisation of the launch of FoodPark, she did have time to answer a few of my questions:

Q: Where did you grow up?

A: I was born in Cambridge and grew up nearby and spent a lot of time in the city during my school years. 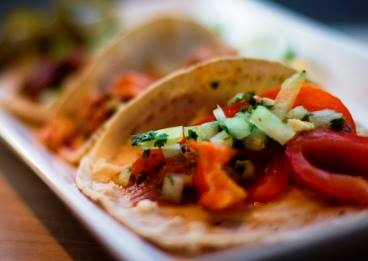 Q: Where did life take you?

A: As a mature student I then studied at the University for 4 years (at Hughes Hall and Queens College), where I was uninspired and inspired in equal measures by the University food scene and started writing my blog. Food has always played a big part in my family – my mum used to bake bread and cakes every week, and all of our meals were home-cooked from scratch – but I only got really into food when I was at university cooking for my neighbours in a big communal kitchen and eating out at places like Al Casbah on Mill Road. My blog led to lots of amazing foodie experiences around the city and eventually to co-organising Eat Cambridge and the launch of foodPark.

Q: What is your fascination with Street food

A: I love good food but I do have a modest budget, so street food is a great way of trying interesting, delicious, freshly cooked food, prepared by chefs to a restaurant quality, but in a relaxed and different setting each time. I love the atmosphere and the effort that has gone into proper street food (very, very different experience from fast food vans!). My first Steak and Honour burger definitely got me hooked on eating on the street and now I seek out street food rather than eating out at restaurants, whenever I can and wherever I go. London is great for street food, and in cities like Berlin it is an integral part of the culture, but other cities that I love like Paris and Marseille are still catching up. 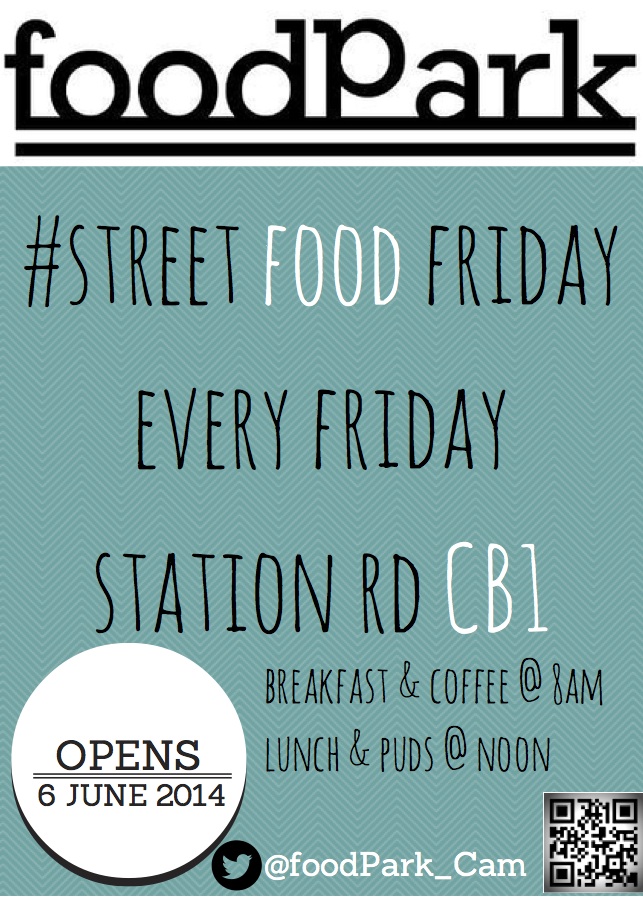 Q: Where did the idea come from

A: I’ve been inspired by places like Street Feast London and the daytime KERB street food markets in London to bring something of that buzzing scene to Cambridge, but I wanted the location to be right and for the demand to be there. With my property degree background, I became interested in the CB1 development and how all of the new residents and businesses in that area were being fed at lunchtimes… I thought they would surely prefer something different from the same sandwiches every day. So, I came up with the foodPark street food market and collective, to bring all of the amazing local street food traders together to fill a gap and provide tasty lunches to the local community until the development becomes more built out and other occupiers fulfil the food retail/cafe element.

Q: How long have you been working on it

A: The idea’s been there for almost a year and I started getting traders involved about 8 months ago, followed by opening discussions with the developers of CB1, Brookgate, about 6 months ago.

Q: Who are involved

A: The collective seems to be growing every day and I’m so proud to be working with some fantastic, top quality street food traders like Steak and Honour, Jack’s Gelato, Warming Your Cockles Coffee Co, Inder’s Kitchen, Urban Street Kings, Two Little Cats Bakery, Dogtown Hotdog Co, Fired Up Pizza, Buffalo Joe’s, Nanna Mexico, Tin Kitchen, Irie Man, and more newly established traders to follow soon. Lots of exciting stuff is going on behind the scenes with some of the traders including new menu launches and new vehicles to be unveiled. We can’t fit all of the traders at the market at one time, so we’ll be rotating traders over the next few months to give everyone a chance to trade. 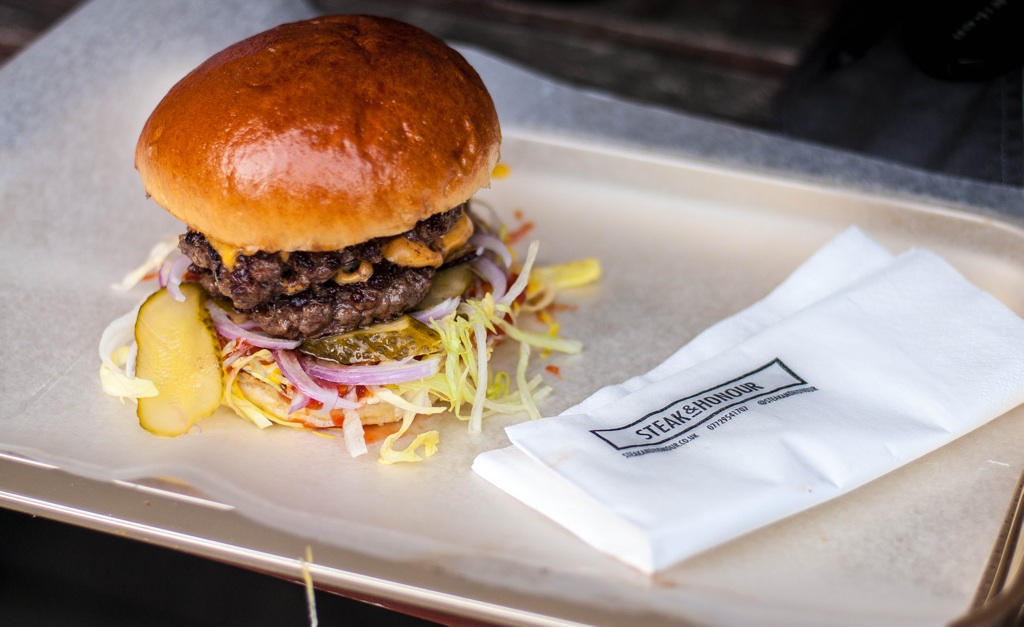 Q: Where and when?

A: The first market, the launch of Street Food Friday, will take place on Friday 6 June on Station Road, just opposite the Microsoft Research building. We hope to add more days and more sites to our market line-up very soon. Trading will start at 8 am with craft coffee from Warming Your Cockles and breakfast muffins by Steak and Honour, followed by lunch at noon featuring kati rolls from Inder’s Kitchen, steamed buns by USK, the famous Steak and Honour burgers, and Jack’s Gelato and creative cupcake by Two Little Cats Bakery. Coffee will be available throughout!

Q: Is it your venture or is a corporation?

A: This is my very own venture, with help from my husband who is a property/investment analyst extraordinaire. For future events we’ll also be potentially partnering with other independent companies and providers in local food and drink industry.

As Heidi puts it, this is street food, not fast food, and it looks and tastes GREAT.

p.s. Every Friday – Steet food Friday at CB1 close to the station opposite the Microsoft building. 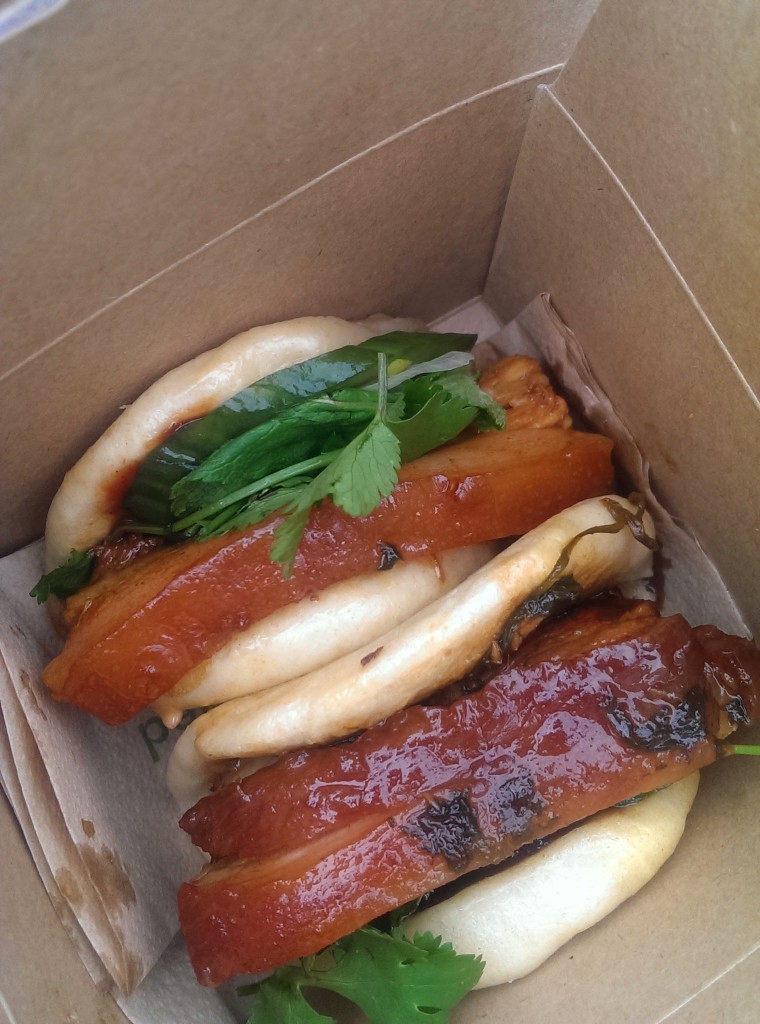