White pudding… I love it! The first time it touched my lips was in Ballymaloe in Cork. I started going to Ballymaloe when it was still a hidden gem. They had just started their cookery school and it was one of those relaxed places you never want to leave. Evenings filled with fine Irish food, guitar music performed by one of the sons of the owners and other delights. Sweet memories indeed. The quaintness has gone I am afraid, but the memory lasts forever! 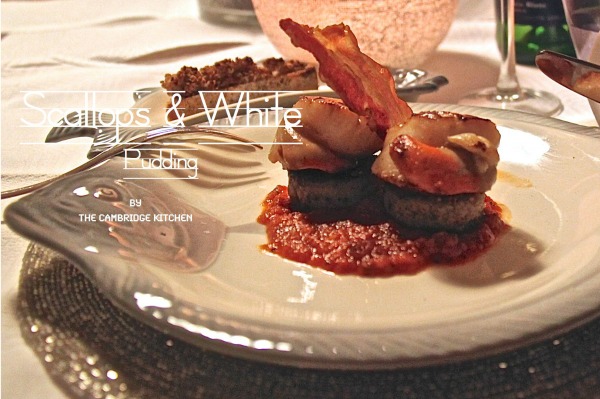 White pudding versus black pudding. That is an interesting one. My late father used to tell me all about the tradition and process of making black pudding. Something you might want to forget when you are eating it. White pudding is a different piece of ‘game’. It’s much milder and has nothing to do with blood.

White pudding is quite hard to get in Cambridge and beyond, but some local butchers and The Gogmag Hills Farmshop stock it at certain times of the year or they can get it for you on request. White pudding is a meat dish popular in Scotland, Ireland, Northumberland, Nova Scotia and Newfoundland according to Wikipedia. White pudding consists of pork and fat, suet, bread, and oatmeal. Earlier versions (pre-1990) often had sheep’s brain added as a binding agent. A similar pudding, known as Hogs’ pudding, is made in Cornwall and Devon and claims to be even spicier than white pudding, as it contains black pepper, cumin, basil, and garlic. I have to say a bit of mystery to me why they would want to add this as white pudding anyway has definitely a bit of a kick!

One of the trendy dishes at the moment is a starter with black pudding and scallops. Although I have had this dish quite a few times, I can’t say I have fallen in love with it. The harsh taste of the black pudding is too bold with the delicate flavour of the scallops. So when I noticed the other day white pudding in a local shop, I didn’t hesitate for a minute and I decided to give my idea a go.

This recipe was inspired by my love of white pudding, craving of scallops and the interesting story of an Irish man in Cambridge. His mother butters a slice of toast and puts white pudding on it as a treat when he comes back home…Yum according to him and I fully agree. It is even better than my famed late night cheese toast with dried chillies flakes!

So here we go…. One of my favourite scallop recipes. Before I go into the detail I like to share where I bought the scallops. As a previous fish buyer for one of the major retailers in the Netherlands I am very choosy where I buy my fish. The other day I had one of those lazy moments and wanted a one stop shop.

I was at the time at The Gog Magog Hills Farm Shop and noticed a fine selection of fish in their freezer. I did hesitate for a brief moment, but I thought I will give it a go as they did look very good. I have to say, they are almost better than fresh ones as the scallops are vacuum packed straight from the factory and then frozen so the lovely juices of the scallops are all in the bag. This cannot always be said of fresh ones as they might have been lying in the counter for a long time. Other freezing methods are single frozen scallops and than glazed ( they get a small layer of water around them).  So all in all a very good buy. If you prefer fresh ones, the place to go is to The Sea Tree in Mill Road in Cambridge. They always have lovely large plump ones with roe available and I have hardly seen better ones than these in Cambridge.

Ok, enough of the banter. Let’s roll up the sleeves. The recipe below is for 4, but it is a perfect starter in a tasting menu for Christmas too. You then only need half the recipe.

How do you make it?

Start off by making the tomato sauce. Put the sweet pepper in the oven and drizzle it with a little bit of olive oil. It will take about 20 minutes in an oven to 180 degrees to brown (almost blacken) the pepper. Once ready, take the pepper out and deseed it. I like to use the skin as most of the flavour is in it.

Whilst the pepper is in the oven, put two tablespoons of olive oil in a frying pan. Let the mustard seeds pop and add the shallot. Fry for about 5 minutes until light brown, add the tomato, the chopped sweet pepper, other spices and add a cup of water and let the mixture bind until a sauce. You might want to add a little more water if you prefer a thinner sauce. Next blend the sauce in a blender. Season if needed with pepper and salt. Keep the sauce warm unit you need to serve it.

When finished, put a spoon full of tomato sauce on the plate followed by the white pudding, scallops and the pancetta. Serve the toast separately on a side plate.

Note: Although it looks a very complicated recipe, it is actually not. Just make sure you have all the ingredients ready and you can make the sauce and the toast well in advance so you only have to reheat and grill it.