17 Sep The Story Of The New Tatties The Story Of The New Tatties

There are a few iconic names in the food scene of Cambridge. Names like
Fitzbillies, The Gardenia and Tatties have been long established names in
the city centre of Cambridge. All of them with  huge number of visitors.

The other day I almost fell  over on my food tour when I noticed, that
Tatties in Trinity street had closed down and a new name had appeared in
the window, Coast. On closer inspection I noticed as the name clearly
implies it was going to be a fish restaurant. My excitement grew as
apart from the Sea Tree at the bottom end of Mill Road, there aren’t
that many  good fish and chip shops in Cambridge. I was even more
pleased, when I learnt that Coast is an independent venture!

Who are the people behind Coast?

Michael Cihan and the manager Raf Kaminski. The previous team from
Tatties. Well actually Michael is the son of Jem, who ran Tatties in
Sussex Street in 2003. A year later they opened Tatties in Trinity
Street.

Why did they close Tatties?

It intrigued me why they closed such a successful business. Were they
fed up with the formula or wasn’t it successful? None of  those I
understand. They sold Tatties in Sussex Street in 2006 and the intention
was that Sussex Street would change name. This never happened and it
became more and more difficult to run two businesses independently under
the same name. Customers weren’t aware of the fact, that they were two
different businesses and the quality of Tatties in Sussex Street was
very different to the one in Trinity Street.

When will they open?

If all goes well in about 3 weeks.

What will they dish up?

Michael and Raf have travelled all through the UK in search of  the
best fish and chips. They tried and tested and have come up with quite a
simple formula. ‘Only the best’! They will serve fish and chips, fried
fish, home made deep fried scampies and crayfish, fresh mussels
(hurray!), home made fish cakes, a selection of fried fish and for the
vegetarian clients they have created a variation on the fish cake. So
let’s call it a ‘vegetarian cake’.

Gael Schaler used to head up the kitchen in Linton at the Crown Inn,
which is known for it’s excellent food. But there is more! In Gaels’s
blood runs fish! His father runs the largest fish mongers in France.

Coast is not only the place to head off to for a good fish and chip or
a plate of mussels, but you can ‘catch’ here your fresh fish too! 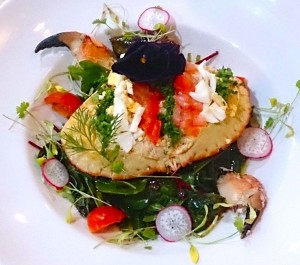